“Picture, if you would, a pleasant, sunny, small town tucked away in the sheltered bend of a wide river. This town is surrounded by rolling hills, hot and dry in the summer, mild with little snow in the winter. Small ranches and isolated homesteads dot the countryside round about. The population of this town is not large. The pace in this town is slow, gentle and amiable.

Then one day, into this idyllic setting, steps an ominous figure whose very presence seems to suggest that all is not well in our small, good town. He is a lawyer and his name is William Ward Spinks, the originator of what was to become Fulton and Company.

Spinks came to Kamloops from Liverpool, England in 1885. Construction on the Trans Canada railway line was just reaching Kamloops. There was only one main street in town and it was a dusty, at times muddy road bounded by a ramshackle collection of woodframe houses, shops, stables, and businesses.

Located on the main street was a small, rough hewn log cabin which served as the town gaol. It was replaced in 1885 by a combination woodframe court house and gaol. Into this setting Spinks opened his first office at 100 West Victoria Street (the original Main Street). His practice prospered and his reputation grew, despite the fact that he didn’t always find enough work in Kamloops to keep him busy. Eventually Spinks became Deputy Sheriff for the Kamloops District.

A highlight in Spinks’ career was surely the time he presided over a lawsuit between Kamloops realtor J.T. Robinson and William and Jane Fortune. In 1907, the Fortunes had sold their extensive Tranquille property to the B.C. Anti Tuberculosis Society for use as a sanatorium. To celebrate the sales, the Fortunes were determined to embark on a trip around the world.

Just as they were ready to set sail, Robinson sued them for $1,000 which he claimed as commission for selling the property. Apparently, when the Anti-TB committee arrived in Kamloops to look at the Tranquille land, Robinson had volunteered to show them around in the Fortunes’ absence. He failed to tell the committee he was a real estate agent.

The November trial was attended by everyone who could squeeze into the court room. A first-rate battle was anticipated between the prosecution and that vociferous “Lady Jane” Fortune. No one was disappointed, except for the Fortunes. They lost.

Spinks was succeeded by Edward Montegue Nelson Woods. Woods was a B.C. born man who received his education at Queen’s University College, Ireland. He was called to the bar in July, 1889.

Woods’ career seems to have been a quiet, uneventful one. He received little notice in the local newspapers and a modern book written on the history of Kamloops makes no mention of him. Perhaps that is the testimony to the generally law-abiding nature of Kamloops more than anything else. Woods remained a keen student of reform and criminal law until his death in 1919.

The firm grew by one more in October of 1889 when Frederick John Fulton joined the practice. He was a Cambridge man who admitted to the position of Solicitor for the High Court of Judicature in England, February, 1887. Two years later, Fulton set sail for Canada then took the train across country, eventually landing in Kamloops.

The population of Kamloops was about 2,000, about half of whom were railway labourers. Men outnumbered women 20 to 1. Kamloops was in the midst of a very prosperous economic time. New churches were being built, schools were expanding, and more businesses were starting up. Construction was non-stop. The town was the market for everything produced for miles around. Industry was accelerating including the lucrative business of mining in gold, silver and coal.

One of Fred Fulton’s best known cases was the prosecution of the well-known American train robber Bill Miner in 1906. Miner had been a stage coach and train robber for most of his life spending more time behind bars than out. He crossed the border into Canada to escape the American Authorities. It wasn’t long before Miner was up to his old tricks. He robbed a train near Mission and made off with many thousands of dollars.

Miner escaped into the Interior of B.C. where he won the affection and confidence of the locals while gleaning helpful information about train movements and gold shipments.

In May, 1906, a train loaded with money and supplies destined for the victims of the San Francisco earthquake was stopped by Miner at Ducks, a small community just outside Kamloops. Miner and his inept gang of two made off with a paltry $15 and a bottle of liver pills.

Miner was caught soon afterwards and tried in Kamloops. The crowd was on Miner’s side, but the evidence was against him. Fulton had little difficulty in successfully prosecuting Miner and sending him to New Westminster to serve yet another prison term. Miner escaped from prison, some say with the benign help of prison guards, and returned to the U.S. There, Miner robbed again and was caught again. He died in a Georgia prison in 1913. 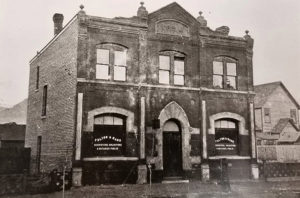 Fulton continued his community involvement in numerous Kamloops posts including City Solicitor and chairman of the Royal Inland Hospital. Fulton died in July of 1936. He was 74.

During Fulton’s career, the firm had expanded. Cecil W. Ward joined as a partner in January 1896, followed by Henry Lawrence Morley, who joined the firm in 1902 and became a partner in 1917. Morley acted as City Solicitor for thirty years and was the firm’s longest practising member, being with the firm for 54 years!

In 1940, the son of F.J. Fulton, Edmund Davie Fulton “Davie”, joined the firm. He was born and raised in Kamloops and received much of his education here. At the University of B.C. he was president of the Debating Club, was active in the Drama Society, and was on the North American Championship Rowing Team. In his final year, Davie was elected President of the Student Society and was subsequently awarded a Rhodes Scholarship. He attended St. John’s College, Oxford from 1937 to 1939 graduating with a B.C. in Jurisprudence in 1939. He was called to the bar in 1940.

During the war, Davie served with the Seaforth Highlanders – he returned to Kamloops in 1945 with the rank of Major and resumed his practice of law.

In 1989, the partners of Hunter Jebson Clarke were determined to recognise the beginnings of the firm and they did so by changing the firm’s name to Fulton & Company.

We in Kamloops jealously claim them as our own. The figure of that first lawyer wasn’t so ominous after all.”